Check out my review on the best range cooker — 25% OFF Today Only! BUY NOW 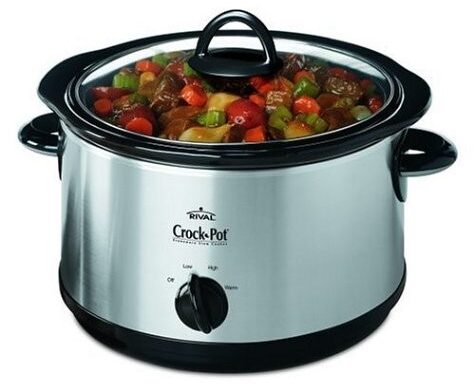 Your slow cooker has high and low heat settings, many also have a medium setting.

Science Expert in correlation with slow cooker specifications indicates that slow cooker at a temperature of ~190 degrees Fahrenheit (87 degrees Celsius) when they’re on the Low setting.

Since a slow cooker is designed to warm very gradually, it can not be compared to a stovetop where there is an open flame. This also tells much that for stovetop, high temperature can be reached easily

But it is not the same for slow cookers.

This is why you should know what temperature is Low, Medium, and high on a slow cooker to make perfect cooking of your food item.

So in summary, the low setting on a slow cooker is 190 degrees F while the temperature on high Slow cookers can reach temperatures of ~300 degrees Fahrenheit (149 Celsius) when they’re on the High setting.

There is more you should know about the temperature of a slow cooker than just the low settings.

These appliances are cost-effective and great for preparing simple and budget-friendly recipes at home.

If you use a slow cooker, you are surely enjoying the health benefit and low-fat method of cooking that is involved.

While a slow cooker warms up to a temperature of least 165 Fahrenheit to a maximum of around 200 Fahrenheit, it is easy to use.

While you are concerned about what the low temperature on a slow cooker is, also bear in mind that the amount of food in the pot will determine the actual temperature.

For your recipe, if you work with a low filled pot, you should expect the slow cooker to become hot quickly and reach a higher temperature.

I have given you a short answer at the earlier part of this post and they were in bolded text. But this is the section where we shall nail the exact temperature a slow cooker cook at.

The other r level that simmers the food anywhere around the temperatures of both low and high is the medium. The major thing you should be concerned about, actually, is how those temperature settings affect cooking time.

Needless to say, not all slow cookers are designed and work the same. So if you are new to the use of slow cookers and you are trying to get as much information you need regarding the cooking time and temperature requirements for recipes, you will need to experiment with your cooker and learn how long to cook food in the slow cooker.

Based on my experience with using slow cookers, I can generalize that 2 hours of cooking on low-temperature settings will require 1 hour when on high.

If you want to make sure that your food is safe and you are cooking properly in your slow cooker, the appliance needs to run at an optimal temperature.

But as a newbie, how do you go about this? This brings us to the need to test the slow cooker temperature.

I do not even need to tell you that a poorly functioning slow cooker can pose a real danger when it comes to the safety of your food item as well as causing spoilage of meal.

It is important to know that your slow cooker works the way it should. For example, an ideal slow cooker should have a low enough temperature that you don’t need to tend to it.

At the same time, the slow cooker should be high enough to keep food at a safe temperature.

Ensuring that this balance exists in your slow cooker, you will be able to make a swift and fantastic choice when picking a favorite slow cooker.

It was when I began to notice that some of my slow cooker recipes were not turning out quite right, that was when I knew how important it is to test the slow cooker temperature.

I don’t like it when a slow cooker cooks too slowly. This should not be mistaken for low-temperature settings as it is almost inevitable when the cooker has been for too long.

My top recommendation in this regard is to make sure you test your slow cooker so that you can be sure that the appliance is safe and ready to cook your food moderately and properly.

So how do you go about testing the temperature of your slow cooker?

First of all, Fill your slow cooker with water halfway to the top.

After doing that, put on the appliance and keep it at the lowest setting.

Cover and leave the slow cooker for about 8 hours.

When it reaches 8 hours, remove the lid and immediately take the water temperature.

If you do not get a water temperature of about 185 degrees F, maybe too higher or too lower, then you know something is wrong.

If you get a higher temperature, one thing you can do is to reduce the time you cook your slow cooker recipe so that they don’t overcook.

On the contrary, after testing the cooking water, the temperature may be less than 185.

If it turns out to be between 40-140 degrees F then consider that as the “danger zone” in your slow cooker. You want to make sure the cooker does not stay in that range too long to prevent bacteria from growing easily in your food.

I’m my opinion, I think anyone with a lower temperature after this test should just change the slow cooker. Because, as I mentioned earlier on, the slow cooker on low should be about 200 degrees, while the high setting should be 300 degrees.

If it turns out to be something different, then it may be that you have been using the slow cooker for too long, and now is just the right time to change it.

Advantages of using a slow cooker

There are so many benefits you can get from using a slow cooker. They are cheap and easy to use and that is pretty much why many people choose to use the appliance.

A slow cooker uses little electricity this can not be compared to the huge power that your ovens and dishwasher take. With the low and slow cooking mechanism of this handy appliance, you can be able to achieve tender meats form tougher cuts.

This will save time and money because there will be no need to waste money on restaurant-quality meals again when you have the right appliance to make them in your house.

The slow cooker is a very convenient appliance and offers a great home cooking option. You don’t have to spend the whole day in the kitchen because you want to make the best consistency of cooked food items.

You don’t need to constantly fix your eyes on the slow cooker while it works. When using a slow cooker, multitasking in the kitchen becomes achievable.

If you’ve just got a durable and well functioning slow cooker, you will be amazed at what a healthy option it is to make low-fat recipes without hassle.

It is important to know what the temperature low and high is on a slow cooker so that you can keep your food safe and expect properly cooked food items every time you use the appliance.

I hope this post has been able to show you all you need to know about slow cooker temperatures both high, low, and medium.

Before I end this post, some important tips when using a slow cooker such as starting with fresh ( and not frozen) meat and not using large cuts or roast also adds to getting a better result.

Also, when using a slow cooker, meat should be cooked in high for 1 hour and then turn cooker to low.

This is much more effective than cooking on low for the entire length of time.

Whatever you do with your slow cooker, make sure you do not reheat foods with the appliance and do not delay the starting time.